Just breathe slower, or, my misadventures with pulmonary disorders 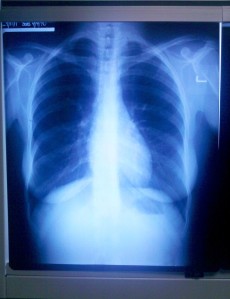 It all started with a persistent hacking cough, tightness in the chest, wheezing and shortness of breath. Welcome to springtime in Atlanta. I’m not usually affected by the massive pollen bombardment, but this year it got me. After a particularly bad bout of symptoms that persisted after fitness bootcamp one night, I went to urgent care. The diagnosis was bronchitis, and I was given an antibiotic. La-dee-da. End of story, right? But something told me to make a follow-up appointment with a pulmonologist. Chalk it up to timing (my husband had just gone to have his asthma symptoms rechecked) or my intuition.

I had spirometry and other standard breathing tests done. Lots of breathing into tubes and machines that wore me out without the benefit of real exercise. Based on my symptoms, history of occasional bronchitis,and years of exposure to cigarette smoke, solvents and other chemicals (from my days as an art student) he initially concluded I had mild chronic bronchitis – basically mild COPD. I did not like this diagnosis one bit. Symptoms can be managed, but it’s a chronic disease.

I had a couple of follow-ups and although my day-to-day symptoms improved, there was just one issue. When I exert myself during exercise, I become easily fatigued and short of breath. After going to bootcamp for over a year, I should be able to at least run a mile consecutively without stopping. Can’t do it. Forget about even trying for a 5K, which has been one of my fitness goals. I’m fitter than many people in the class, but begin to gasp for air after a quarter of a mile. My husband and I have joked that I’m a contender for the “1/4K.” Funny, but not really. And the thing is, the symptoms are nothing new. I’ve struggled at running any kind of distance as long as I can remember, get easily winded going up several flights of stairs, and have found it difficult to keep up on moderate to strenuous hikes. I do have an arrhythmia (PVC), but it usually does not present a major issue.

I underwent a pulmonary stress test two weeks ago at Piedmont Hospital to determine what might be causing my symptoms. It’s quite an ordeal to undergo the test, but it can give all sorts of information about what’s going on with your pulmonary and circulatory systems. During the test, the proctor seemed concerned about my heart rate, and ordered an EKG. One of my biggest fears is something serious with my heart function, because of a family history of heart disease. I got through the test without keeling over, which I took as a good sign.

I met with the pulmonologist yesterday to discuss the findings. It’s rare to see a doctor perplexed by a report, but it took several minutes of head-scratching and “hmmms” before he got all the facts sorted out and could go through them with me. What he was seeing apparently refuted his initial diagnosis of obstructive airway disease. So, the good news is, I don’t have COPD. Overall, my levels were good or above predicted values – except when it got to my heart rate (low for the amount of exertion I was giving)and increased respiratory rate. In a person with healthy weight and fitness level (and now, apparently, no obstructive airway disease) this shouldn’t be happening. Off I went to get a chest x-ray.

Have you ever seen an x-ray or other imaging of the inside of your body? It’s truly a thing of beauty. There’s something inherently magical about viewing your body’s parts and processes in their interconnectedness. Several years ago, I had to have an ultrasound done of my heart, and it was awe-inspiring to see my heart beating while I could feel it pumping away in my chest. The only thing that eclipsed it, of course, was seeing my daughter in the womb via 3D ultrasound. Anyway, I was able to take a picture of my lovely chest x-ray on the light box while the doctor was out of the room. (Glad I did too, because he drew all over it during his review, much to my horror.)

We have a tentative diagnosis of elevated hemidiaphragm. Basically, what that means is, one side of the diaphragm is higher than the other, which leaves less room for the lung to fully inflate. I still have to go for a “sniff test” (which sounds weirder than it is) where they view my lungs via fluoroscopy (can I get a copy of that too, please?) while doing forceful breathing to see if the diaphragm is not moving as it should. After that, we will know if it truly is elevated hemidiaphragm or we’re back at square one. My diaphragm is not severely elevated, which would probably require surgery. I asked what possible therapeutic options were recommended. He said to get a good heart rate monitor with the goal of raising my heart rate to recommended levels and to breathe slower during strenuous exercise.

I bet you’ve never had your doctor tell you to breathe slower. It was like some kind of cosmic joke: tell the person who does pranayama breathing and teaches meditation (ki breathing) that she needs.to.breathe.slower. What’s odd is, last week I was out on the track, attempting to do my “1/4 K” and did two things differently that seemed to help: I shortened my stride and deliberately breathed slower and longer for as long as I could. I must have been on to something without knowing why.

Now, here’s where things get interesting. If I have elevated hemidiaphragm, how did I get it? One possible cause is damage to or impingement of the phrenic nerve, which controls the diaphragm. In most cases, it would require some form of trauma to cause injury to the nerve, which runs through the cervical spine. But as I was digging around the internet, I came across a reference to “nerve root impingement secondary to cervical spine degenerative disease.” I have congenital cervical spine stenosis, which has caused nerve impingement issues for nearly 20 years. Could it possibly be contributing to the pulmonary issues I’m experiencing – and have experienced for as long as I can remember with strenuous exercise? And if it isn’t elevated hemidiaphragm, then what is going on with me, because the test results clearly indicate some abnormal pulmonary functioning that is not explained by obstructive airway disease (and my lung x-ray was beautifully clear, as you can see.)

Update: I spoke with my pulmonologist and told him about my cervical spine stenosis. He said it’s quite plausible an impingement could be causing partial or intermittent symptoms consistent with his diagnosis, and is interested to see if the findings from the sniff test on Friday match up. Meanwhile, my chiropractor is looking back through my treatment reports and x-ray imagery to see what other information she can confirm.

(P.S. That’s a picture of MY lungs there – please do not use it without permission!)

3 responses to “Just breathe slower, or, my misadventures with pulmonary disorders”